Undisputedly one of the border's most talented female vocalists, Erin's voice has been likened to such vocalists as Karen Capenter, Suzie Quatro, Melissa Etheridge, K D Lang and Alannah Miles. This illustrates the wide range of music Erin covers, and, combined with her guitar playing and crowd-pleasing personality, ensures a successful function.

Erin is a unique entertainer! 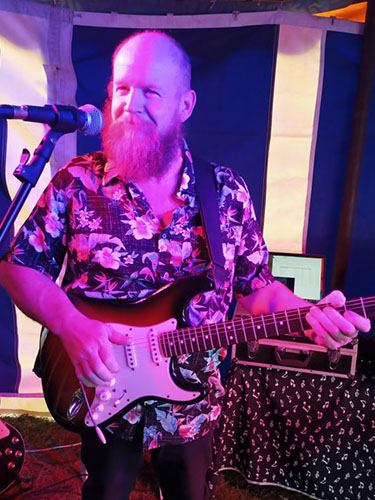 The backbone of the Overtime Duo, Andrew is a talented lead and rhythm guitarist, and has achieved certificates in classical and modern guitar. Andrew is also responsible for all the behind-the-scenes sequencing, for example, drums, keyboard and bass, as well as other instruments. Andrew is currently learning the banjo, and is hoping to master the instrument and add it to the show.

Andrew is conscientious and professional!

Overime Duo can keep it country, rock along with the 50’s and 60’s rock 'n' rollers, or keep you singing and dancing along with songs from our 70’s and 80’s list and beyond.

There's only one thing you need to do.

"Get on the dance floor and dance the night away OR sit back and relax and listen".

Some of the artists we cover

Some of the artist we cover.

Some of the songs we perform

Email: This email address is being protected from spambots. You need JavaScript enabled to view it.